Residents in Wuhan take swabs from a mother and her daughter during a 10-day campaign, May 13, 2020. (CCTV)

"Wuhan is a safe city; Wuhan people are healthy," a hashtag from infectious disease doctor Li Lanjuan, topped the trending list on Weibo, China's equivalent to Twitter on Wednesday, with 160 million views and over 10,000 engagements.

Li made the statement right after the central Chinese city of Wuhan completed citywide nucleic acid testing. The former COVID-19 epicenter tested 9.89 million residents in the city and only found 300 asymptomatic cases.

The hashtag "Wuhan is a safe city; Wuhan people are healthy" topped the trending list on popular Chinese social media platform Weibo with 160 million views and over 10,000 engagements. (Photo/Weibo)

The topic "No confirmed cases from 9.89 million nucleic acid test" had also become a trending topic on Wednesday morning, with 120 million views on Weibo.

The city's authority said it had adopted a method known as "pool testing" to speed up the process. Lab technicians pooled several samples from different people and tested them in one tube.

The testing has served as a precaution against a second wave of the novel coronavirus after a small cluster of infections reemerged in mid-May, ending a month-long record of zero new cases in the city.

The result also reassured those who are still living in fear across Wuhan, months after the coronavirus claimed over 3,869 lives.

"I feel so proud of my country for its incredible accountability!" Chinese netizens said online praising the measures taken in the city.

"Hope after the result it out, people from the Wuhan city won't be discriminated over the country," another poster @Younianmiaosan said. He is not the only one concerned about the tacit discrimination toward people from Wuhan, or even Hubei province.

"This is an unexpected result for all of us. I dare say Wuhan is one of the safest cities in the world. Now, it's time to get back to normal life!" @ZhouZhangfan said.

News of the tests appears to be bolstering hope that things will return to normal soon. 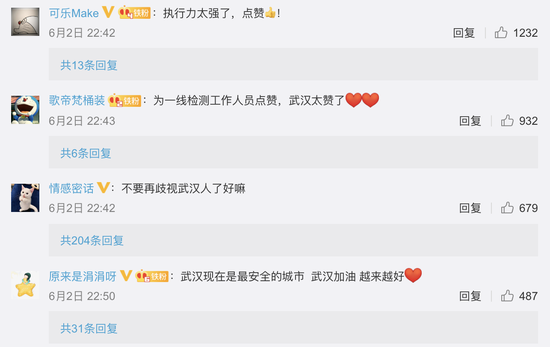 "China's efforts to defeat the coronavirus are exemplary. In India's Kerala state is following the Wuhan model, and we were able to effectively block the coronavirus," @Babu Ze from India said on CGTN's Facebook page.

According to Hu Yabo, the deputy mayor of Wuhan, the government will cover the total cost of the 9.89 million tests, which could reach as high as 900 million yuan (126.77 million U.S. dollars).

The Wuhan authorities said the city had a comprehensive understanding of its epidemic situation and the test results have built a foundation for the city's work and school resumption.