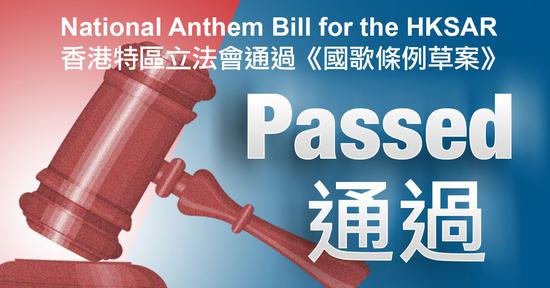 The National Anthem Law will take effect on June 12, after the bill was passed in the Legislative Council by a vote of 41 to 1.

According to the bill, misuse of and acts insulting the national anthem are liable to a maximum penalty of three years imprisonment and a fine of HK$50,000($6,450).

Secretary for Constitutional and Mainland Affairs Tsang Kwok-wai said the government will promote the law to enhance the Hong Kong public's sense of national identity.

Tsang called on the public to show more respect for the national anthem, which is a symbol of the country. He pointed out that the law will not affect the general public unless they publicly insult the anthem, thus it is unfounded to claim the law will undermine freedom of speech.

Hong Kong society on Thursday welcomed the passing of the bill, saying it will bolster the public's sense of national identity.

Wong Kam-leung, a primary school principal and chairman of the Hong Kong Federation of Education Workers, said the move will strengthen students' understanding of the anthem and the nation's history.