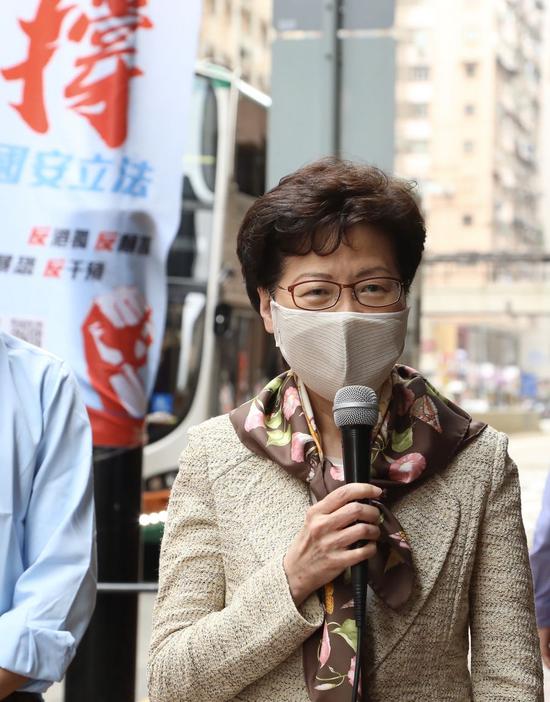 Chief Executive of China's Hong Kong Special Administrative Region (HKSAR) Carrie Lam has said on Wednesday that the HKSAR government will fully cooperate on national security legislation for HKSAR and urged Hong Kong people to actively express their opinions during the process of the legislation.

The HKSAR government will cooperate on the drafting of the related law, improve law enforcement capability, and launch national security education, Lam told a press briefing in Beijing, accompanied by several senior officials of the HKSAR government.

During the legislative process, the central authorities will listen to opinions from various sectors in Hong Kong, including government officials, chairman of the Legislative Council, legal experts, national lawmakers and political advisers, Lam said.

Relevant departments of the central government will also hold seminars in Shenzhen and Beijing to solicit opinions from Hong Kong people, Lam said.

Lam called on Hong Kong people to actively attend those activities and said they can also express opinions to the HKSAR government and the Liaison Office of the Central People's Government in the HKSAR.

Lam said national security is the top priority that concerns not only the nation but also Hong Kong, as well as more than seven million Hong Kong residents.

Responding to the threat of a foreign government to impose sanctions on Hong Kong and revoke its special status, Lam urged foreign countries to respect China's stance and their relations with China and not to take unilateral action that will bring negative impacts on bilateral ties.