Universities should be stricter about international enrollment 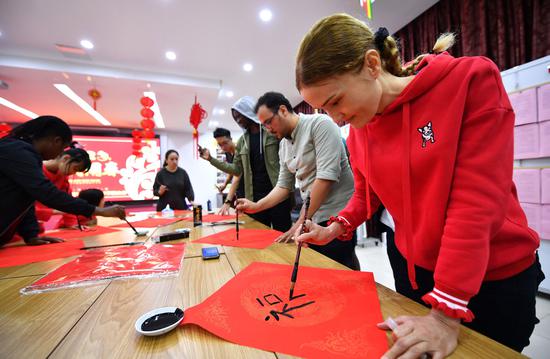 Universities in China should not blindly pursue internationalization or expand the enrollment of international students, said the Ministry of Education.

Rather, they should focus on the quality of international education and attract more talented youth from around the world to study at Chinese universities, the ministry said in a recent notice.

They should put more effort into teaching international students about Chinese laws, regulations, cultures and customs to increase their understanding of China's development and tell the world what they have observed, it said.

The country remains committed to promoting international education exchanges and cooperation and opening up the education sector, the notice said.

The notice came as President Xi Jinping extended a welcome to excellent students worldwide to study in China in his reply to a letter from Pakistani students studying at the University of Science and Technology Beijing on May 17.

In his letter, Xi encouraged the students to communicate more with their Chinese peers and join hands with youth from all countries to contribute to promoting people-to-people connectivity and building a community with a shared future for humanity.

China has been the most popular destination for international students in Asia since 2014.

In 2018, the country welcomed 492,000 international students from 196 countries and regions to study at 1,004 universities and research institutes, according to the Ministry of Education.

Chu Zhaohui, a senior researcher at the National Institute of Education Sciences under the ministry, said that in an effort to appear more international, some Chinese colleges and universities have indiscriminately expanded the number of foreign students without paying enough attention to their credentials.

"That has caused the quality of the students to fall short of the criteria and affected the reputation of China's higher education," he said.

The quality of teaching at some colleges and universities is also low due to shortages of teachers capable of delivering courses in English, he added.

As the number of international students in China has increased steadily in recent years, these students have received preferential treatment and have been embroiled in controversies, he said.

While Chinese students have to pass rigorous national college entrance exams to enter Chinese universities, international students have been admitted based on their test scores in high schools and the HSK exam, a Chinese language proficiency test, Yu said.

Compared with international education powerhouses like the United States and the United Kingdom that have strict evaluation and admission standards for international students, China only looks at the HSK scores, which are not enough to evaluate the academic capability of the students, he said.

"We must develop our own testing system and standard for international student admission to make sure they have the same academic capability as their Chinese counterparts."