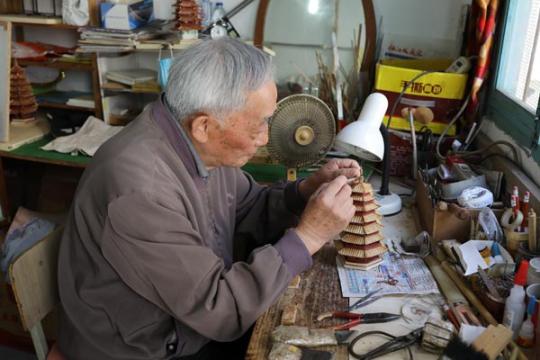 Since learning of the art form 20 years ago when he was attending a school for senior citizens, the 81-year-old has created hundreds of miniature buildings.

Many of his works have received accolades, including a replica of the iconic City God Temple in Shanghai which won first prize in a national competition. The model, which took him a year to complete, is now held by Sijing town, the area where his small studio is located.

His other notable creations include celebrities' residences and Sijing Old Town.

"Most of my works, including the China Pavilion of the World Expo, are being displayed in different institutions as well as at the school for senior citizens in Sijing town," Peng says.

Although his creations may look impressive and incredibly detailed, Peng does not spend much on this hobby－he relies primarily on such waste materials as used bamboo chopsticks, discarded tri-ply wood, mooncake boxes, cigarette boxes and old fabrics.

He says that it is difficult to determine how long it would take to complete a model. A small model could be finished in an hour, but larger works could require months or even years, he says.

One of Peng's first miniature models was a replica of the Anfang Tower, a scenic spot in Sijing town that was part of the reconstruction project of the ancient town in 2002.

Having passed by the tower almost every day, Peng wondered if he could make a model of it. This was when he realized that one needs more than just a steady pair of hands to create miniature models－a good memory was essential as well.

He did not have the structural drawings of the tower nor a camera at that time, so he could only rely on his eyes, he says.

"I had to take note of the height of each floor, the camber of the eaves and even the patterns of railings and window decorations."